The University of Benin has debunked reports that’s been making rounds on the internet that a recent graduate who wore a t-shirt that has the inscription, aggressive malpractice brought me this far has been asked to rewrite her exams from 200 level. 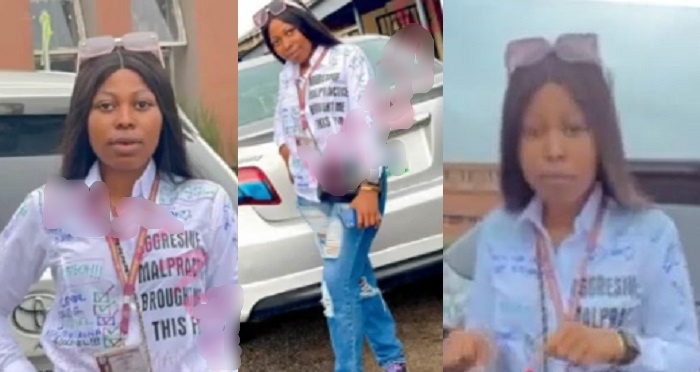 The lady identified as Peace Ufuoma went viral on social media earlier this month when she wore the controversial t-shirt after her final exam.

The varsity then set up a panel on July 13 to investigate ufuoma for allegedly malpractice. The committee was given a week to submit its report to the Microbiology Head of Department.

In the News, that started making rounds on Wednesday, July 21, that the committee has concluded that Ufuoma rewrites all her exams from 200 level.

But in a new development, the spokesperson for the University of Benin, Benedicta Adeola Ehanire, has stated that there is no report yet from the panel set up to investigate Peace Ufuoma, who is under probe for alleged exam malpractice.

“The current report online is fake. The University is following due process; panels have been set up to investigate her claims and the panels are yet to submit their report to the management who will consider the report.

“It is not something as straightforward as people are portraying it to be. The University is following due process.”

“Person bite My Eye because of Food” – james brown Revealed why he was in hospital.

“You glow differently when you are in-love” – Tonto dikeh says